Tottenham Hotspur are reportedly ready to splash the cash in the summer transfer window after selling players, but not buying to this point. The club were recently offered Real Madrid midfielder Mateo Kovacic by the Spanish club, and all indications are Tottenham are ready to snap him up. 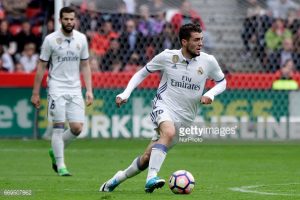 Real Madrid are attempting to free-up cash for Monaco’s Kylian Mbappe and are ready to rid themselves of Kovacic after two less than impressive seasons. The Croatian is valued at around £21 million, and would add depth to the Tottenham midfield. The Daily Star reports the midfielder has now requested a transfer move away from the Santiago Bernabeu.

Although he has played for both Inter Milan and Real Madrid, two of the world’s biggest clubs, Kovacic has truly failed to breakthrough both teams. Despite being more of a regular player for Inter and scoring five goals in 2014-15, Kovacic failed to make the impact many had expected he would at the San Siro.

Spurs are also tracking Croatian 20-year-old Filip Benkovic. The Dinamo Zagreb player is thought to be available for around £15m. Benkovic is considered the hottest Croatian football prospect at the moment, and his signature would be quite the coup for Tottenham. According to reports, the only drawback in signing the player is his lack of first team football.