According to the Mirror, the Alexis Sanchez transfer saga is set to take a new twist. The Chilean forward is desperate to push through a move to Manchester City and Sanchez will hand in a transfer request this week to Arsene Wenger. 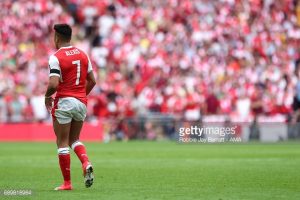 Sanchez is still in Chile as he recoups from the flu. Although some have doubted the realism of Sanchez’s flu claims, South American media have backed up the story. Sanchez has released several images of him suffering from the flu, which have been met with widespread criticism.

Alexis Sanchez 'ill face' is one of the most pathetic things I've seen in professional football in about 20 years. What is he, fucking six?

The Mirror has also reported Sanchez has requested £400,000-a-week which prevents both Paris Saint-Germain and Bayern Munich from signing the forward. Arsenal are attempting to meet the player halfway and resolve the Sanchez transfer saga. The Gunners have prepared a £300,000-a-week deal for the Chilean for just one season with the idea of selling him next summer.

Arsenal are currently playing in the Emirates Cup as the team warms up for the FA Community Shield. After Saturday’s win over Benfica, Wenger addressed the media over Sanchez.

“He has flu. I have spoken to him by text,” Wenger said. “We have been in touch with him and his doctor. He will come back as soon as possible.

Wenger has stood firm on Sanchez’s proposed move away from the club. Many fans and pundits have seen his stance a bit too firm. Meanwhile, others have seen Sanchez’s decision not to return to London for the start of the Premier League season as pathetic.

Arsene Wenger says Alexis Sanchez has flu, they're texting and he's due back at club on Tuesday. Adds "he's staying". #AFC #SSN

Arsenal kickoff the season with the FA Community Shield on August 6th. The Gunners will take on Chelsea at Wembley Stadium.

Whether the Sanchez transfer saga is over by then will be anyone’s guess. But it appears this story will go down to the last day of the transfer window.