Chelsea manager Antonio Conte is still attempting to strengthen his squad ahead of the new Premier League season. One player he has identified as a must have is Juventus full-back Alex Sandro. 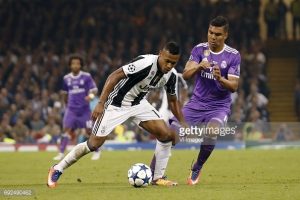 The Blues are trying to bring the Brazilian to Stamford Bridge, but the team have had a a £54 million bid for the player rejected. Italian media is reporting the Blues are hot on the heels of Sandro, but will have to spend in excess of £70m to land the defender.

Juventus are in no mood to sell Sandro and are said to be unwilling to budge from the £70m asking price. Bianconeri manager Massimiliano Allegri has told Italian news reporters he doesn’t want to sell one of his main defenders this close to the start of the season and has identified Sandro as one of the best full-backs around.

“Alex is a Juve player, he’s extraordinary and he’s not moving from here.

“He’s improved a lot since he arrived here and he still has margin for improvement. I think he is one of the best full-backs in the world.”

Juventus have already lost Leonardo Bonucci to Serie A rivals AC Milan and do not want to lose another top player in defence.