Philippe Coutinho staying at Liverpool has been the biggest topic on Merseyside for some time. If reports from the Echo are true, then it looks like he will be staying for another season as Barcelona has ended their attempts to sign the Brazilian midfielder. 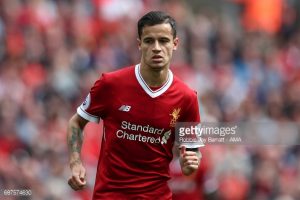 Barcelona had been trying to add the Liverpool man, but had transfer bids rejected previously by the Reds. Liverpool had turned down a €100 million deal for the player prior to Barcelona selling Neymar to PSG for €222m last week.

News of Coutinho staying will be met with great relief by Liverpool fans as the Premier League season kicks off in a week’s time. If the reports are true.

According to the Liverpool Echo, Barcelona are now targeting Juventus’ Paulo Dybala. However, Barcelona have already had a transfer bid of €120m reject.

Despite the Liverpool Echo claiming that Barcelona are now focusing on Dybala, other media outlets have claimed the Catalans aren’t quite finished. The International Business Times have reported Liverpool manager Jurgen Klopp is resigned to losing Coutinho and will target West Ham’s Manuel Lanzini as the man to replace him.

Coutinho was left out of Liverpool’s team for their final preseason match against Athletic Bilbao, which has added fuel to the fire of an impending departure to Barcelona.

The summer transfer window won’t close until August 31st, so it looks like fans may not know whether Coutinho staying is for sure for some time.