Tottenham have missed out on the transfer purchase of Keita Balde who has officially agreed a deal with Monaco. The forward will take the place of the outgoing Monaco star Kylian Mbappe, who is ready for a switch to Paris Saint-Germain. 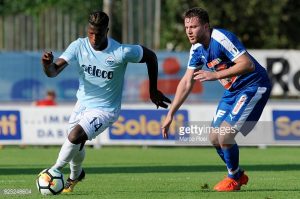 Tottenham had been after Balde and had agreed a £27.5 million deal with Lazio for the forward. However, Balde wasn’t interested in moving to the North London club. He has now agreed to move to Monaco for a transfer fee of £27.9m.

Balde had been holding out for a transfer to Juventus, but the Bianconeri did not come up with a transfer fee to equal Lazio’s asking price.

While Tottenham have missed out on Balde, the club have also sold defender Kevin Wimmer to Stoke for £18m. Spurs have made over £76m in transfer sales this summer, but have failed to replace the outgoing players. The team’s biggest sale was right-back Kyle Walker for around £50m. The club are still expected to sell left-back Danny Rose to Manchester United before the transfer window closes on Thursday.

Spurs have bought just two players this summer with the biggest being defender Davinson Sanchez for £42m. However, Tottenham have failed to finalise any other transfer deals for the players they have been linked with.