According to sensational reports from Spain, Real Madrid are ready to make a move for Tottenham star Dele Alli. It appears Real Madrid will finally let midfield flop Mateo Kovacic go in a swap deal to land Alli as the Spanish champions attempt to sign the attacker in January. 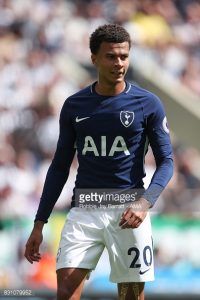 Due to Real Madrid’s poor attacking form to begin this term and the loss of striker Karim Benzema, the club are looking for additional offensive talent to add to their squad. The 21-year-old, Alli, has been identified as a top talent, and the Spanish side want to add him to their ranks.

Despite the reports from Spain, it seems foolishly to believe Spurs would swap the English international for Kovacic. Despite Tottenham being linked to the Madrid man during the summer transfer window, Kovacic has failed to deliver during his time at the Bernabeu, and Spurs would demand a sizeable cash amount along with the player. That is, if the reports from Spain are true.

Tottenham supporters should keep in mind that the reports of Real Madrid signing Alli were first released by Spanish media outlet Don Balon. The media source has come under considerable criticism for some of the more outlandish transfer rumours it has reported in the past.

Although it is reported Tottenham will not sell Alli in January, Don Balon believes Los Blancos could land the English international next July. Alli is currently being courted by two of the biggest football agents in the world, Jorge Mendes and Mino Raiola. Both have worked with Real Madrid previously, and working with one of the two agents could see the Tottenham star join another top side in the future.

Alli joined Tottenham in February 2015 for a mere £5.97 million, and his current contract runs until 2022. In six appearances this term, the attacking midfielder has tallied two goals and one assist.