Arsenal are fifth in the English Premier League and are level on points with Chelsea. Arsenal maybe out of the title race, but the team still have a theoretical shot at securing second. Arsenal transfers in January could sway the team toward finishing in the top four and returning to the Champions League.

Of course, a lot has been said about the two players, Alexis Sanchez and Mesut Ozil, who could leave in January. But Arsenal will be working hard to find players to replace the outgoing attackers.

The Thomas Lemar to Arsenal transfer saga is getting tiresome. The Monaco winger was about to join Arsenal in August, but he backed out at the 11th hour. Now it looks like he could be ready to join the club. However, there are those in the media that are reporting this move won’t happen.

Lemar has been linked to Liverpool and Manchester United as well. So, it looks like he could have his pick of top Premier League clubs. If Lemar goes to Arsenal, he would be the replacement for Sanchez, and part of a new generation of Arsenal players. 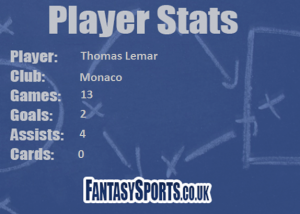 It is hard to believe this deal will actually go through. Lemar had the chance to go previously, but backed out. What will have changed his mind now? Former Arsenal player Robert Pires has stated the club have missed out on him. So, it seems more likely that Lemar will land somewhere else.

A Turkish under-21 international, Berkay Ozcan is a promising 19-year-old currently playing at Stuttgart. Ozcan has stated he is talking to Arsenal about a transfer to the Emirates. Whether he is trying to force a move away from Stuttgart or he is really discussing a move is unknown.

“My agent and I are in discussions with Arsenal. Arsenal have been scouting me for the past two years and send representatives to watch my games,” Ozcan told beIN Turkey.

Ozcan has played just once in the Bundesliga this season. He has also appeared in two German Cup matches. He is being valued currently below £1 million and could be a bargain buy for Arsene Wenger. Ozcan has potential, but will Wenger be there after this season?

Ozcan has plenty of Bundesliga 2 experience with Stuttgart, but thus far hasn’t featured often for the team since it returned to the top-flight this season. He has plenty of potential, and is a midfielder for the future. Arsenal need midfielders now, especially as Granit Xhaka continues to get exposed for his weaknesses. Ozcan isn’t expensive, and his current contract expires in July 2019. He could be one of the only Arsenal transfers that comes off in January.

Arda Turan has spent the last two-plus seasons at Barcelona being a non-factor for the club. He has continually looked likely to leave, and January could finally see him go. Turan hasn’t played for Barcelona yet this term. He’s ready to leave to resurrect his career, and if reports are to be believed, Arsenal have made a bid for him already.

The Metro indicates he could join Monaco or Galatasaray. However, he seems set on playing for Wenger. The winger is currently valued at £13.5m, and Arsenal could be the club that sees Turan turn his career around.

Of the three Arsenal transfers, Turan seems the most likely. He wants out of Barcelona badly and the club do not want him. The only question is, will Wenger sign someone in January? With the impending moves of Ozil and Sanchez, the logical idea would be for Wenger to sign one or two attacking players. But Turan is 30-years old, which could put Wenger off the transfer.

Of the three, Lemar would have the most fantasy impact. The Frenchman has been solid for Monaco this term and with Arsenal’s tactics and players around him, Lemar would do well. Lemar could be the type of player to tally eight points a game most weeks for FPL managers.