One of the hottest transfer properties across the summer has been Leicester City’s Algerian international Riyad Mahrez – and debate continues to rage as to where one of the Foxes hottest properties will be once the upcoming transfer window closes at the end of January.

Here, we look at the options seemingly open to Mahrez, and analyse where we feel he will be playing his football for the rest of the season and beyond, along with available. 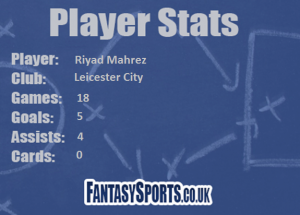 Whilst several clubs remain interested in Mahrez, he now appears again relatively content at the King Power Stadium and his form has gradually increased over the season – which could well be a reason for why Leicester are slowly climbing the table and are unbeaten in five Premier League games. With new manager Claude Puel in place, Mahrez could well be convinced to suck it and see at the King Power for the remainder of the season, being, along with Jamie Vardy, the club talisman.

The Gunners have been the club most closely associated with Mahrez, but much depends here on whether they keep hold of Alexis Sanchez and Mesut Ozil. Both players seem very likely to leave the Emirates Stadium which, if so, will mean boss Arsene Wenger will quickly want to replace these with proven Premier League quality, which he would certainly see Mahrez as. Arsenal seems a good fit for Mahrez, who’s expansive and fluid style would certainly accommodate the Algerian – but a few things need to fall into place first before, it would appear, Arsenal make a firm move for him.

Chelsea most certainly do not need to sell to buy, and would see Mahrez as exactly the kind of player they would want to bring in just to enhance their squad and utilise where and when needed according to the match being played. Its very easy to see  Mahrez joining the likes of Hazard, Pedro, Fabregas and Co in providing the flair and ammunition for Alvaro Morata and the other Chelsea forwards, as well as chipping in with goals himself. Funds would not be an issue – and after a frustrating summer, the Blues will be anxious to land a marquee name or two quickly to reinforce their top four push, Champions League campaign and FA Cup run.

Not much has been made of the link of Mahrez to Anfield, and it does feel much more of a reach – but it isn’t beyond the realms of impossibility that Jurgen Klopp makes a move for the Leicester attacker, especially with the news that Sadio Mane has further injury issues and there is ongoing speculation surrounding Phillipe Coutinho. Liverpool will also feel they need more depth and cover, especially if they can keep their Champions League progress going and keep in the top four chase of the Premier League.

The Daily Mail recently reported that Barcelona made an approach for Mahrez also over the summer but, like Italian counterparts AS Roma, were turned down as they would not meet the Leicester valuation of Mahrez. However, the Catalan giants may well come back for Mahrez as they look to future proof their team, with several of their squad aging and potentially looking for a final lucrative move away from the Camp Nou. Whilst Leicester may well stick firm with their valuation whomever they may sell to, they may well be more open to a move away from the Premier League, rather than see Mahrez come back to haunt them via Premier League fixtures.

Of all the options listed above, the one that makes most sense to us is a January transfer from the Blues of the King Power Stadium to the Blues of Stamford Bridge. Chelsea remain on the periphery of the league title race and look certain, despite their loss to Roma, to progress from a tough Champions League group. Money is not an object, they do not need to make squad space to accommodate Mahrez, and we feel this is a deal likely to happen – with 6/1 quite decent odds also in what may only be a two or three horse race.

Mahrez has been incredibly important to Leicester and FPL managers. He has tallied 94 points and a move to a team like Arsenal, Liverpool or Chelsea could see him increase that hall. With better players around him, Mahrez should be able to tally more fantasy points.