Chelsea are interested in signing Paris Saint-Germain outcast Lucas Moura in January. However, the Blues need to sell Brazilian winger Willian to fund a move for the player.

Antonio Conte has cooled on Willian and the player has fallen out of favour with the Chelsea boss. The Italian is ready to replace the former Chelsea Player of the Year with PSG’s Moura in a major deal. 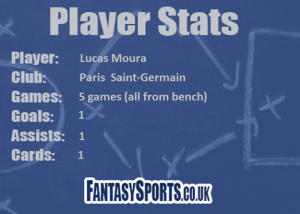 The French side is ready to cash in on the 25-year-old as he too has fallen down the pecking order in Paris. In addition, it is believed PSG need to make further player sales to fall in line with Financial Fair Play. The team made numerous sales and loans after the signing of Neymar over the summer.

According to the Metro, Chelsea plan to sell Willian for a considerable amount. The money obtained would then be paid to PSG for Moura. It is claimed PSG want £27 million for the player.

According to Transfermarkt.co.uk, Willian is valued at £28.8m.

Moura has appeared in five PSG games this term in Ligue 1, scoring once and assisting one goal. However, all five appearances came from the bench. Moura has played in five additional matches in the Coupe de France. He has tallied a further three goals in the competition.

Chelsea are not the only team believed to be interested in Moura’s services. Arsenal and Liverpool are both on alert, and both clubs could add the Brazilian to their stables.

Arsenal are in need of replacing the outgoing Alexis Sanchez and Mesut Ozil. Meanwhile, Liverpool are eyeing a move for another top-rated attacking player. However, the team more importantly need to fill their defensive holes.

Lucas would be a high-quality attacking addition to Chelsea. Lucas could go right into the side and be the creative spark the team are missing. If he arrived in the Premier League, Lucas could become a point scorer in FPL. Perhaps the only problem is he could take points away from Eden Hazard.

Should Chelsea sell Willian and recruit Lucas Moura?  What do you think?