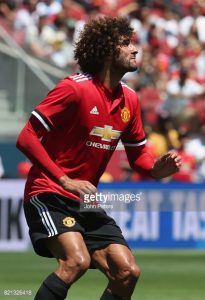 Marouane Fellaini could leave for free

Fellaini’s current contract will expire in June 2018, and Manchester United could lose the midfielder on a free transfer. The club are in danger of losing a few players to free transfers in the summer. It is believed Jose Mourinho wants Fellaini to be a part of his team in the future despite the sides being unable to agree a contract.

Fellaini has become a popular player at the club thanks to his hard work and timely goals. Fellaini has tallied four goals in nine games this season, and due to his form, is being sought by teams around Europe.

During the summer transfer window, Turkey’s Galatasaray had attempted to sign Fellaini. Although the Belgian’s contract is up in the summer, reports from Old Trafford indict Mourinho will not sell him in January.

The Sun reported this morning that Fellaini has rejected Manchester United’ most recent contract offer, and will now seek a pre-contract with a club on the continent. The news website reports Fellaini turned down a two-year offer that would have been equal to or greater than his current £120,000-a-week.