West Ham striker Javier Hernandez has been accused of asking to leave West Ham. The striker joined the club over the summer from Germany’s Bayer Leverkusen and has been one of the Hammers few goal threats.

Reports from Mexico claim Hernandez wants to rejoin former side Chivas. However, Hernandez has denied the accusations that he has asked West Ham’s hierarchy to leave the club. 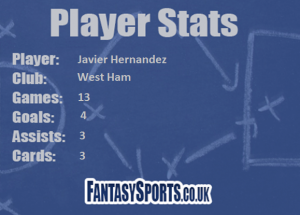 Hernandez took to Twitter to calm fans who had reacted angrily to the reports of him wanting to leave.

“I am 100% committed to helping improve the situation that we are all experiencing in West Ham,” Hernandez stated through Twitter.

“And as always I say this I am #chivadecorazón but I have not asked to leave West Ham in no time.”

Hernandez is currently injured, and will miss Sunday’s trip to Watford. West Ham currently sit in 18th place. David Moyes was appointed the team’s new manager over the international break and will coach his first match this weekend.

Hernandez has scored four of the 11 goals the Hammers have scored this term.

Hernandez had been linked with a move to Major League Soccer’s Los Angeles FC before he made the move to east London, and there were a list of other clubs vying for his signature at the time he joined West Ham.

Hernandez is fifth on West Ham’s team in FPL points. He hasn’t been a huge success  since returning to the Premier League. He has tallied just 43 points this season, but  Hernandez’s potential is immense. With the Hammers improving slowly, FPL managers should believe Hernandez can get more goals, more assists and points.