Although it seems likely, according to UK bookmakers, that Spanish star Fernando Torres will remain at Atletico Madrid, Newcastle United remain at the head of the market for Premier League clubs linked with the aging forward, with a loan move for Torres seemingly not out of question when the January transfer window opens.

The Geordies are just 6/1 to land Torres – not bad odds for what could be a very short field, and considering the relationship Torres has previously enjoyed with Toon boss Rafa Benitez. 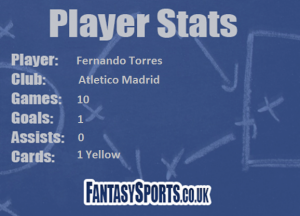 Torres is down the pecking list currently at Madrid, having started only one La Liga game this season and hasn’t scored at all this season in all competitions for Atletico. But Benitez could be tempted to give the superstar a chance, as he sees his own side struggling to find the goals that could keep their Premier League residence intact for next season.

Torres turns 34 next month, and whilst his pedigree cannot be doubted, he is getting no younger or faster. But his presence alone could well ignite a spark amongst his teammates and the passionate Geordie fans – and who better to turn to in a ‘supersub’ capacity for 20/25 minute cameos if indeed Torres can no longer sustain a full 90 minutes.

Of course, Torres would not come cheaply and it remains to be seen whether a transfer like this could happen whilst current Newcastle owner Mike Ashley completes the transfer of the club to seemingly heir apparent Amanda Staveley and the PCP Partners Group.

But with Premier League survival key to whomever has ownership of the club next season, Benitez will need the freedom to make moves in January – and if he believes Torres can provide the firepower needed to secure Newcastle’s survival, he must be given the financial backing to achieve it.

Torres back in the Premier League would be a great, romantic story – with Newcastle United the perfect setting to tell it.

Fernando Torres would make a minimal fantasy impact if he signed with Newcastle. The Magpies are fighting for safety and in Benitez’s system, it’s doubtful the Torres of old would come out. He has barely played for Atletico this term, and he is far from form. That said, he would be an upgrade for Newcastle, or at the very least, he’d be equal to what the team already have in the striker corp. Benitez brought the best out in Torres while the two were at Liverpool. It could happen again, but managers need to see some points returns first, before buying the Spaniard.

WHERE WILL FERNANDO TORRES BE AFTER THE JANUARY TRANSFER WINDOW? LATEST BOOKIES ODDS