Chelsea star Eden Hazard is angry over the team’s Saturday match at Liverpool. The Blues are coming off of a Champions League fixture on Wednesday night in Azerbaijan and now face Liverpool 72 hours after dispatching Qarabag. 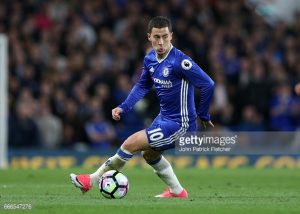 Chelsea manager Antonio Conte has been extremely upset over the lack of preparation time the Blues have had ahead of their Premier League clash. The team arrived back in England at 3am on Thursday morning. The flight from Azerbaijan to Gatwick Airport covered 2,500 miles.

Hazard has now come out on the side of his manager, and bemoaned the short turnaround the team has for their match against Liverpool.

“The time between the two games is very short,” Hazard said.

“We need to adapt and we didn’t adapt well against Manchester City, so we need to do better on Saturday.

“I want to be feeling good. A lot of players didn’t play,

“I played only 60 minutes and N’Golo (Kante) also came off so we can be fresh on Saturday, even if the game is close.

“We are professional, we can deal with this. We will do everything, we will do recovery and we will see on Saturday.”

Chelsea currently sit in third place, nine points behind Manchester City. The team have won four straight matches in the Premier League. The Blues have qualified for the knockout stages of the Champions League, but will need to win or draw in the final group game to assure they finish top of group C.

Does Eden Hazard have a point? Should Chelsea have an extra day of rest before playing Liverpool?