The loud gasp heard on Friday night in the northwest of England came when Liverpool goalkeeper Alisson Becker suffered a torn calf muscle. Alisson compiled a brilliant 176 Fantasy Premier League points in 2018-19, making him one of the best goalkeeper/defenders available.

For FPL gameweek 1, 1,769,075 managers selected Alisson in goal (I was one of them). Due to leaving Liverpool’s match with Norwich City in the first half, Alisson claimed just one point in 38 minutes of play.

The Reds will be without Alisson for what could be up to six weeks. A return date of 22 September has been reported. With Alisson now out of action, which FPL alternative goalkeeper should managers turn to?

Manchester United hammered Chelsea 4-0 at the weekend with goalkeeper David de Gea obtaining a gameweek 1 points high for goalkeepers with 10.

De Gea is nicely priced at £5.5 million and Manchester United have an attractive set of games upcoming. Despite gameweek 2 opponents Wolverhampton Wanderers posting a 2W-1D-0L record against Manchester United last season, the Red Devils can pitch a shutout at Molineaux. 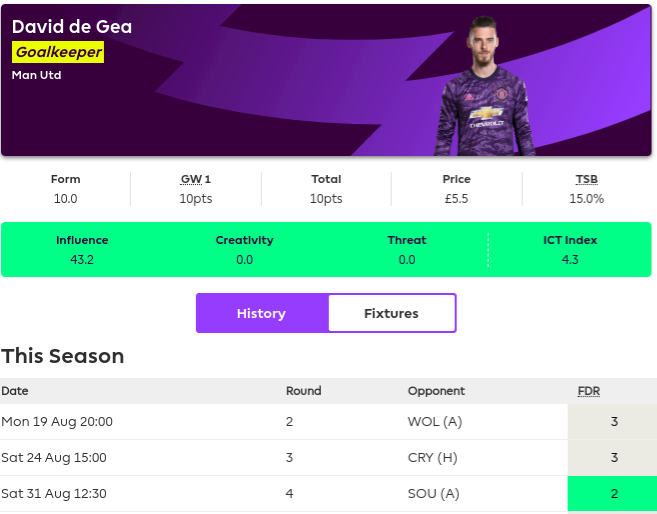 Wolves will play on Thursday night in the Europa League against FC Pyunik. It will be the Black County club’s fourth Europa League qualifier. Manager Nuno Espirito Santo has picked strong teams to get Wolverhampton Wanderers into the Europa League group stage and players looked tired on Sunday against Leicester City.

Santo’s team still managed a nil-nil draw after having a goal chalked off thanks to VAR. Regardless, Wolverhampton Wanderers could be shutout again, although they could keep Manchester United out of goal too.

Did anyone expect Brighton to defeat Watford so handily in gameweek 1? If you say ‘yes’ then you are lying. Brighton were brilliant under Graham Potter and Mathew Ryan tallied nine points. Ryan made three saves as he kept a clean sheet against last season’s FA Cup runners-up.

At £4.5m, Ryan and Brighton have back to back winnable matches. West Ham at home is next followed by a south coast derby against Southampton at the Amex. Brighton do go to Manchester City at the end of August, so there is that fixture to consider if selecting Ryan as an Alisson Becker replacement.

Brighton can certainly defeat West Ham, who looked poor against Manchester City. The Hammers put up no struggle whatsoever in their defeat. Southampton also looked lacklustre with a loss to Burnley, 3-0.

Alisson may be injured, but selecting his direct replacement for the next few weeks may not be a bad option. At £4.5m, Adrian is a low-price option FPL managers know he will get minutes every week until Alisson returns, or he gets injured.

Like Alisson, Adrian will have a solid defence in front of him which includes the world’s best centre-back Virgil van Dijk. Alisson could return in late September in time for Liverpool to play Chelsea at Stamford Bridge.

Adrian would start at least four Premier League matches with the likes of Southampton, Arsenal, Burnley, and Newcastle United facing off against the Spaniard.