Trent Alexander-Arnold is the most progressive passer of a ball in Europe’s top five leagues this season, according to data provided by leading supplier, Wyscout.

The young Liverpool player averages 17.9 progressive passes per 90 minutes to top the ranking of players whose passes significantly advance their team towards their opponent’s goal.  The ranking has been created from players who play in the Premier League, Bundesliga, La Liga, Serie A and Ligue 1. 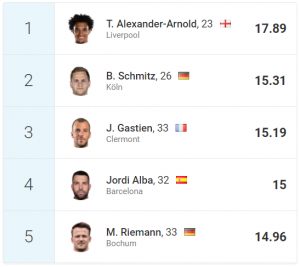 While positioned as a right back for the Reds, Alexander-Arnold can be found more often than not in his opponent’s half, typically exchanging wide triangle passes with Mohammad Salah, or cutting inside and playing raking cross field balls to left back, Andy Robertson.

The West Derby born youngster also provides 0.42 assists per 90 minutes and he is; without question, one of the most exciting offensive talents in the game today.

Trent is joined in the top 5 by fellow progressive passers:  Benno Schmitz of Koln, Johan Gastien of Clermont, Jordi Alba of Barcelona and Manuel Rieman of Bochum.

The next 3 Premier League players in the list are: Luke Ayling of Leeds (10th), Joao Cancello of Man City (12th) and Romain Saïss of Wolves (14th).

Alexander-Arnold, who provided three assists while playing for England in San Marino earlier this week is expected to feature for Liverpool, who host Arsenal in the evening kick off on Saturday.