The 2017-18 English Premier League kicks off Friday with Arsenal hosting Leicester City. Arsenal are entering this Premier League season flying under the radar after missing out on the Champions League last term. 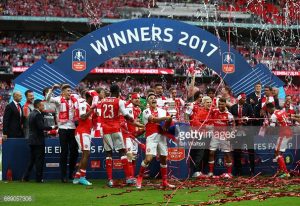 While some fans wanted change at the Emirates Stadium, Arsenal’s board have decided to stay the course, especially after Arsene Wenger won his seventh FA Cup last season.

The Gunners are being overlooked by many this season, but with the offseason moves the team have already made, Arsenal look very strong. One piece of silverware has already been won – FA Community Shield – and more could be on the way. Here are 5 reasons Arsenal could win the English Premier League this term.

Arsenal signed Alexandre Lacazette from Lyon for £46.5 million this summer. His addition to the players already at the Emirates gives Arsenal even more attacking options. Olivier Giroud, Alexis Sanchez, Mesut Ozil, Theo Walcott, Danny Welbeck and more are all capable of scoring and creating goals. Compared to the other teams in the Premier League, only Manchester City and Liverpool have comparable players up top. Chelsea, Totteham and Mancehser United lack the depth in quality Arsenal now showcase. Lacazette scored 28 goals in 30 matches a season ago, he will only make Arsenal more dangerous in front of goal.

2. Alexis is still a Gunner

Despite the rumours and reports all summer, Alexis Sanchez is still an Arsenal player. Wenger’s decision to keep the Chilean could be a masterstroke as he was hands down the best player at the club in 2016-17. If Arsenal can secure a first Premier League title since 2004, it won’t sting quite so much when Sanchez walks away for free. That is, if he doesn’t want to stay after winning the Premier League. Sanchez tallied 24 goals and 11 assists in 38 games last season. Now that the club have Lacazette to score goals, Sanchez’s assists number should increase.

Say what you will about Arsenal’s defence, but the club gave up just 44 goals last term. Wenger has done brilliantly to improve what was already a serviceable backline by adding Sead Kolasinac. The Bosnian made the Bundesliga Best XI in 2016-17 and had the most assists by a defender during the league season. He was a little tank in the FA Community Shield and popped up to head home Arsenal’s leveller. His signing also shows there is a lot of quality in the free transfer market as he joined Arsenal after his Schalke deal ran out. Manchester City should take note.

4. Wenger is still there

Supporters craved change at Arsenal last season, but many of those voices seemed quieter once the Gunners secured the FA Cup. Some of the criticism towards Wenger is warranted, but which coaches could go into Arsenal and win a Premier League title right away? Some wanted former Dortmund coach Thomas Tuchel, and others clamoured for Eddie Howe, but winning at Arsenal is easier said than done. Manchester United have shown that it isn’t easy to replace a legend.

Supporters were angry that Arsenal didn’t qualify for the Champions League for this season, but it could be a blessing in disguise. Since Arsenal’s last Premier League trophy, fighting on both fronts – along with the domestic cups – was killing the team. Arsenal couldn’t win the Premier due to the Champions League and vice versa. Without Champions League football, Wenger can rest his key players and keep them fresh for league matches. Yes, Arsenal are in the Europa League, but Wenger can play his fringe players and youngsters in the competition.

This season’s Arsenal are the best top to bottom the club have had for a while. This could be the team’s year to finally lift the Premier League trophy again, and Wenger could achieve vindication.

Do you agree with our 5 reasons Arsenal could win the Premier League? Get in touch with us on Twitter and Facebook.