Liverpool forward Mohamed Salah joined Liverpool last summer from Roma. However, Salah is already being linked with a move away from the Anfield club next summer.

Salah has tallied 18 goals in 24 appearances and thanks to his brilliant form, news reports are spreading that Spain’s biggest clubs are tracking the winger’s play. 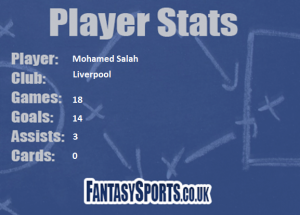 The Liverpool forward joined the club for £34 million from Roma and many believed the Reds would lose Philippe Coutinho to Barcelona. The club were able to keep Coutinho and the two players have combined well for the Reds.

Liverpool take on Spartak Moscow in the Champions League in midweek. The Reds will turn around and host Everton at the weekend.

There’s no way Salah is sold in midseason, and it’s doubtful the Egyptian leaves anytime soon. Salah leads FPL in total points and has been brilliant this term. Many didn’t know what to expect from him after his lack of playing time at Chelsea. However, Salah has hit the ground running and is scoring goals. He could get 25 to 30 this term, and FPL managers should have him in the XI each week. Who knows what he’ll do next?