When the Premier League fixtures were released last summer my prediction was one point from our first five games, not because I thought Watford are gonna be relegation fodder this season but these were five dirty fixtures to start our second season in the top flight.

That point was either coming from Southampton or West Ham and  so after our draw at St Marys we were free rolling (in my mind anyway). Then the Chelski match..ooh what might have been?

At home to the gunners I have an almost instant dislike to Younes Kaboul for the early penalty, it was Nordin Amrabat you fool!!!   Sorry Younes, all is forgiven.  Our second half was much improved and if Iggy had gotten his overhead kick on target things may  have been different.

At this stage, my drinking buddies were delighted to inform me that Watford were never in the bottom three last season and were going down now, without any doubt!

So last Saturday I’m away on a stag party in a little village called letterfrack, a village with  a dark history – but here’s not the place for that.  Behind the counter , there’s a guy with the weirdest looking green jersey and “Gestede 36” (I think) on the back – a Blackburn fan for his sins.  I proceed to show him my phone contacts, believe it or not I’ve got Tommie Hoban’s number on my phone – but it’s not a big surprise to this guy – it seems Tommie is a regular visitor due to him having relatives in the area.

But back to business and the Manchester derby.  I’m surrounded by Mancs and pretty soon they know I’m in the boozer, standing on the bar stool roaring on the blue of Manchester as the carve united up again and again. Result! 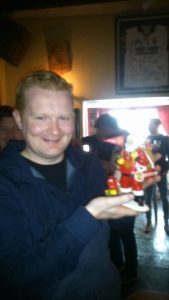 Now to the three o clock games and the cans of wine are going down rapid…bloody hell what a mess?  The whole boozer has turned on me including my thirty two strong stag comrades..two nil to West Ham and I’m the butt of every joke now.

“Can of wine bartender”, time to numb the pain, but up pops Iggy and it’s game on.  As we board the bus, Troy the boy nails a stunning equaliser.  It’s a full bus on the way to Clifden and by the time we arrive, they’re shouting “that Lavelle guy down the back is a right pain in the arse”!

Yes, boom – what a comeback!  What a beautiful day!  Copious amounts of cider later  and my throat is raw from the roaring, excellent stag party!

The week ahead has thrown up some little gems.  Feyenoord play the rotten devils in the Europa League on Thursday. Hope Steven Berghuis does the business, while we await the Mancs arrival at the golden Vic on Sunday morning.

Then, this Irish Hornet has the small matter of an All-Ireland final at 3:30pm!