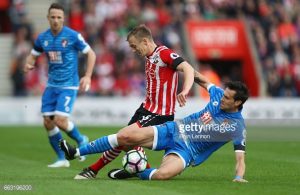 English Premier League gameweeks 34 and 35 are a mishmash of teams vying for Europe or survival. Due to the FA Cup fixtures at the weekend, gameweek 34 ends on Thursday night with the Manchester Derby and gameweek 35 begins Saturday.

While there are some games still to be played in FPL gameweek 34, we will look ahead to FPL gameweek 35. Who should you select for your defenders this week? Let’s look and see.

Charlie Daniels isn’t a new face to our top 5 defenders list as the Bournemouth man has had a solid FPL season. Gameweek 34 saw him joint-top points scorer in FPL with 14 as the Cherries defeated Middlesbrough.

Daniels is a great price, £5.1, and Bournemouth have a great run of fixtures against Sunderland, Stoke, Burnley and Leicester coming up. All could and should be Bournemouth wins.

Manchester City’s players have been pretty underwhelming in FPL this season. That said, Aleksandar Kolarov has the potential for an excellent gameweek 35 against Middlesbrough.

Despite City’s defensive injury problems, the team are playing a Middlesbrough side that have scored the fewest goals in the Premier League this season. At only £5.8, Kolarov cannot only get you a clean sheet, but he could weigh in with a goal or an assist.

Daley Blind has found a full 90 minute Premier League game hard to come by this season. The Dutch defender has featured 20 times in the league under Jose Mourinho, and turned in some solid FPL performances.

Of course, Manchester United have the derby midweek, but will then turn their attention to Swansea. Against Burnley at the weekend, Blind turned in an eight point performance, and if he plays against the Swans, could pull in another healthy dose of points.

Andrea Ranocchia has done well for Hull since arriving in January. The Italian centre-back has tallied seven, five and eight points in each of his last three matches.

Gameweek 35 sees Hull battle Southampton as the Tigers continue to fight for their Premier League lives. Southampton have scored the sixth fewest goals in the league with 37 this season. Another clean sheet performance could be on the horizon for Ranocchia if he gets into your FPL or daily fantasy sports team.

West Ham take on Stoke in gameweek 35 as the match will feature two teams attempting to get into the top half of the table before the end of the season.

West Ham defender Winston Reid put his best performance since gameweek 21 in at the weekend. His six point tally against Everton saw him finally put an end a major points drought.

Stoke have lost five of six games, scoring just five goals in that time. West Ham and Reid have potential for clean sheet points, so give Reid the nod in your back line for FPL gameweek 35.

Tom Heaton continues to top FPL goalkeepers in 2017. Despite a combined four points in his last two matches, Heaton should return to form as Burnley take on Crystal Palace in gameweek 35.

While Palace are much better than they were during Alan Pardew’s final days, Burnley’s Heaton has the chance to keep the Eagles at bay; much like he has done to other teams this season.

Burnley’s fixture list isn’t the most difficult to end the season, so selecting Heaton and keeping him in your side is a good call for the rest of the term.