According to Spanish reports, Atletico Madrid forward Antoine Griezmann has re-thought his previous snub of Manchester United, and the Frenchman now wants to leave the capital club. Manchester United are believed to be the team he wants to sign with now that he has re-considered. 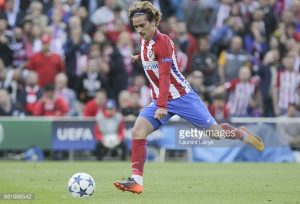 Spain’s Don Balon, has reported that the player is still not certain of his future with Atletico, and Manchester United could be his destination. The media outlet reported Griezmann is considering a move due to Atletico’s possible sale of goalkeeper Jan Oblak to Paris Saint-Germain. Sources have stated Griezmann believes Atletico’s ambitions are too low if they allow their No. 1 goalkeeper to leave.

Although sources close to the Atletico star have spoken about his possible move to Manchester United, Griezmann’s agent has told media this season may be the Frenchman’s last in Spain. That is, if he doesn’t leave before the end of the term.

The 26-year-old was heavily linked with a move to Old Trafford in June, but agreed to stay with Atletico as the club were banned from making any transfer signings this summer.

The Daily Star reports that Griezmann’s departure from Atletico could spur the Spanish team to buy Mesut Ozil from Arsenal.

Griezmann’s desire to join Manchester United could be dealt a blow as the club have decided to keep forward Anthony Martial. The winger was linked with a move to Serie A’s Inter Milan. In May, manager Jose Mourinho spoke about his desire to sign the Atletico’s top-rated player when asked about him.

“Ask Ed Woodward. He knows since March who I want, what I want and how much I want. Now is for him to work,” Mourinho stated.

Manchester United won their English Premier League week 1 opener, and are preparing for their week 2 match against Swansea.