Liverpool have been embroiled in two of the biggest transfer sagas this summer. Of course, the club are still trying to hang on to Philippe Coutinho, who seems destined to leave the club now that he has got on the bad side of the club’s supporters. 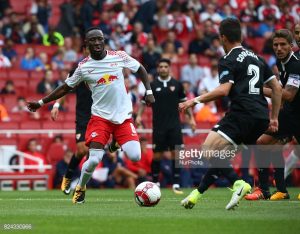 The other transfer saga that the Reds have experienced this transfer window has been the one involving RB Leipzig midfielder Naby Keita. The midfield workhorse was all set to move to Anfield earlier this window, but the move never truly materialised. However, that could all change if Liverpool defeat Hoffenheim tonight and qualify for the Champions League group stages.

The last time the Reds played in the Champions League group stages, where they finished third, the club earned nearly €34 million. Liverpool last played in the Champions League in 2014-15. With the improved strength of the United Kingdom television market and the increase in money in football, Liverpool should earn more than that if they qualify. The added money available to the club will help them land Keita, if the team once again pursue his signature.

If Liverpool do sell Coutinho, the club already have Sadio Mane and Mohamed Salah to take his place as the team’s creative player. Adding Keita would allow the midfield to not only have more steel, but to have a box-to-box player that the club lacks.

With Liverpool standing firm over Coutinho’s proposed move to Barcelona, the Spanish giants have been linked in recent days to Keita as well. Rumours of the interest may just be a way to get Liverpool to react to allow Coutinho to leave.

The Reds have already lined up an alternative to Keita in Real Madrid’s Mateo Kovacic, but the fact is, Liverpool are desperate to sign the Leipzig midfielder. If Liverpool can win tonight against Hoffenheim, their chances would surely increase in their pursuit of Keita. However, the club must win first to interest the player to move to Anfield due to Leipzig already being in the group stages of the Champions League.

JOIN US FOR MATCHCHAT LIVE RIGHT NOW FROM ANFIELD, WHERE WE’RE DISCUSSING LIVERPOOL VERSUS HOFFENHEIM, BEFORE, DURING AND AFTER THE GAME.