Manchester United’s manager Jose Mourinho has spoken about the team’s need for further players this transfer window and the club are monitoring the situations of several top players right now. The market window will close in eight days, and a big transfer deal for Manchester United is thought to be on the cusps of occurring. 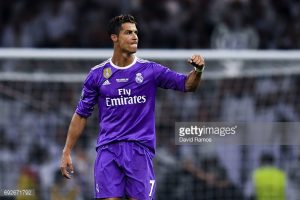 Manchester United have purchased three players so far this summer. Romelu Lukaku, Nemanja Matic and Victor Lindelof have all joined. However, the team still needs strengthening before the window closes.

One player that has been heavily linked in the past week is Monaco’s Thomas Lemar. The French winger has been on Arsenal’s radar all summer, but United have suddenly emerged as front runners for the player’s signature. Monaco have claimed Lemar is not for sale this summer, but reports have indicated a transfer of £45 million or more could land the player at Old Trafford.

Cristiano Ronaldo has also been linked with a move back to the Premier League and the Mirror is reporting the Madrid player is unhappy with the Spanish side. Manchester United are on alert of the possible re-signing of the Portuguese player and his signature would indeed be the big transfer deal Red Devil fans have been waiting for the team to make.

Gareth Bale’s name also continues to be linked with the Red Devils, and like Ronaldo, his signature would be a big transfer deal to close out the summer window.

Zlatan Ibrahimovic could be set for a return to the club as well. The Swede has been rehabilitating a devastating knee injury this summer, and the door seems to be open to a return once he is fully fit. The Metro is reporting the striker could return to Old Trafford in October and be signed on a free transfer. Ibrahimovic had been linked with a move to North America’s Major League Soccer, but agent Mino Raiola has stated that the superstar will be playing in Europe once he is fully fit.

Manchester United have also been linked with other players this week, but none of them would fall into the category of big transfer deal. The Red Devils are tracking Fulham’s teen left-back Ryan Sessegnon, who would cost the club around £30m. Sergi Roberto of Barcelona is also being linked to Manchester United after he was demoted from the team’s starting XI. The right-back was a regular last season, but isn’t expected to have the same impact this term.

Manchester United have plenty of options with time running out on the summer transfer window. Mourinho could be one big transfer deal away from securing his first Premier League title with Manchester United.

Who do you think will be the next Manchester United signing? Get involved in our chat.