After a summer of doubt, controversy and wondering regarding Arsenal’s talisman Alexis Sanchez, Arsene Wenger today confirmed that Sanchez is fit and ready for selection, with Sunday’s huge game against Liverpool earmarked for his return. 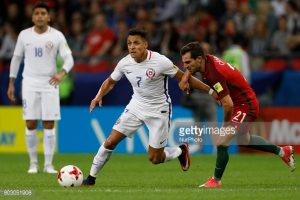 Sanchez’s availability for selection and potential return to the Gunners line up will be a huge boost for the club, who have suffered an indifferent start to the season.

His return though, and potential selection, does not take away the fact that Manchester City are still lurking in the shadows and ready to make a move for the star – in fact a return to action may even make their move more imminent, with him being ready to plug straight into the City team before next Thursday’s transfer window closes.

How Wenger utilises Sanchez at Anfield on Sunday, if at all, remains to be seen. It is distinctly possible Sanchez makes the bench, or starts for the Gunners with the knowledge he is unlikely to last the full 90 minutes.

But all eyes will very much be on the returning star, and theres no doubt that Arsenal fans will hope he shows commitment and desire on the pitch in a shirt he has done fantastically well in to date.