Manchester City manager Pep Guardiola has stated he is open to another big transfer purchase this summer as the Blues prepare for a title push under the Spaniard. 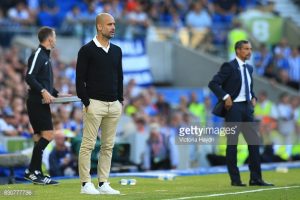 While the club want to make another significant transfer deal, chairman Txiki Begiristain has revealed signing Monaco’s Kylian Mbappe will not happen.

“We are out of the race,” Begiristain said.

“It is impossible to do it with the timing remaining.”

Manchester City have also been linked with a move for Barcelona’s Lionel Messi, who is out of contract next summer. Despite his deal coming up in less than 12 months time, Begiristain has said the club will not be signing Messi as he is expected to remain with Barcelona.

Guardiola also wants to add former Manchester United defender Jonny Evans to the team, despite already spending heavily on three defenders and a goalkeeper this transfer window. Manchester City have spent £220 million on six players this summer, and the additions of Sanchez and Evans would increase the team’s spending to more the £300m.

“We have five or six days left, and I think the market is going to move,” Guardiola recently said. “Now it’s difficult and it was difficult before.

“You have to spend more money to buy the players right now – not just Manchester City, all the clubs.

“I think there are a lot of clubs with players who are not going to play and they are looking for the best solution for the clubs and especially for the players.

“They will wait until the last minute to make a deal cheaper and better for three sides – for the players, clubs and managers too.”