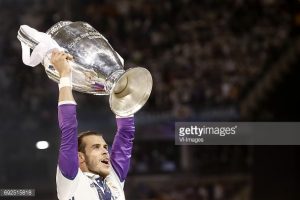 Bale’s place in the Madrid side has not been guaranteed by team coach Zinedine Zidane, and speculation has grown over the Welshman’s possible exit from the Santiago Bernabeu.

According to the reports from Spain, Manchester United have told Real Madrid they will pay a maximum of £92m to land the winger.

Bale moved to Madrid from Tottenham for £90.9m in 2013, and his current contract does not expire until 2022. The 28-year-old extended his Madrid stay in October 2016, and a move to Old Trafford would most likely be the last big money transfer of his career.

Although Real Madrid seem to have cooled their interested in Monaco’s Kylian Mbappe, the club’s hierarchy are pondering whether or not to cash-in on Bale now while his transfer price is still high. Despite scoring and creating goals on a regular basis since he arrived at the club, Bale has spent a lot of time out with injury. In appears he has also been usurped by young Marco Asensio in the Madrid pecking order as well.

Manchester United have already re-signed Zlatan Ibrahimovic on a free transfer, and the Red Devils seem to have plenty of available attacking players. If the club do sign Bale to play on the left wing, it could make Anthony Martial expendable at Old Trafford. Manager Jose Mourinho has seemingly had an on again, off again interest in Martial at the club. The Frenchman was thought to be on his way out and to be part of a swamp deal with Ivan Perisic from Inter Milan this summer; but plans for that deal have now ended. If Bale does arrive, Martial could be allowed to leave to make room in terms of finances and playing time.

Does Manchester United need Gareth Bale? Get in on the conversation below.