Liverpool are ready to break their transfer record by purchasing the highly in demand Monaco winger Thomas Lemar. While Liverpool have dealt with their own transfer saga over Philippe Coutinho this summer, Monaco have as well with Lemar. The player was said to be going nowhere this summer after links to Arsenal and Manchester United, but reports from England and France indicate Liverpool are on the cusps of signing the Frenchman for an incredible £74m. 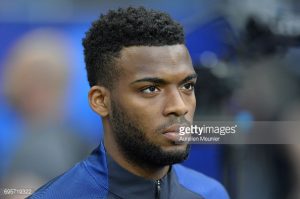 Liverpool have secured seven points thus far this season and are coming off of the dismantling of Arsenal in gameweek 3. However, the Reds are looking to add further attacking power with the impending loss of Coutinho to Barcelona. Despite the expected loss of Coutinho, the Liverpool ECHO reports that a deal for Lemar is in no way connected to Coutinho leaving the club.

The 21-year-old has been in great form for Monaco this term. Lemar has tallied two assists in four Monaco Ligue 1 appearances, including one in Sunday night’s 6-1 demolition of rivals Marseille.

Although Monaco have proven they will sell players and restock their squad, the club have had Lemar strongly set in their plans for this term. Contrary to reports about the deal being close, Monaco could hang on to Lemar with just a few days left in the transfer window.

Monaco have started the season very strongly, winning all four matches. The reigning Ligue 1 champions look like the only side in France capable of stopping Paris Saint-Germain from running away with the title this term.

Liverpool’s attack has looked sensational, and the addition of Lemar would give Jurgen Klopp another solid offensive choice as Liverpool battle in both the Premier League and Champions League this season.

Will Lemar end up at Liverpool and do the Reds need the Frenchman? Is he worth an incredible £74m?