After a considerable amount of investment in the offseason and three straight losses to start the term, Slaven Bilic has taken the lead in the Premier League sack race. 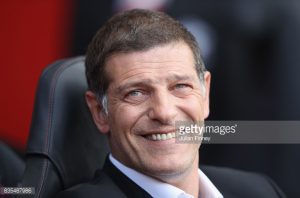 According to Sky Bet, Bilic is now the favourite to be canned first this season. Bilic is 4/6 to be relieved of his duties just one week after Crystal Palace’s Frank de Boer was being eyed as the first dismissal.

De Boer isn’t safe, however, as the Dutchman is just behind Bilic in the Premier League sack race. De Boer is 11/8 to get the axe, and many are calling for him to forget about his Ajax-style revolution at Selhurst Park in favour of him worrying more about keeping the team in the top-flight.

Three Premier League managers have started the season without gaining a single point. Bilic, De Boer and Bournemouth’s Eddie Howe have all failed to win or draw a fixture. Howe was on the verge of gaining a draw against Manchester City on Saturday only to give up a late goal in the seventh minute of stoppage-time.

Howe is 20/1 to be the first manager sacked. Despite the poor start, Howe is expected to steer the Cheeries to safety and be in the job by the end of the season.

Bilic could be the first manager sacked as the Croatian is in the third and final year of his current contract. Former player Robert Snodgrass has publicly blamed Bilic for West Ham’s problems. The player just recently left the East London side for Aston Villa after a miserable time with the Hammers.

It has been reported by the Sun that Bilic will hold talks with West Ham’s owners, which could see him ushered out the door at the London Olympic Stadium.

According to Sky Sports, Rafael Benitez could be lured to West Ham from Newcastle to takeover the struggling club.

Who do you think will be the first manager sacked this season?