According to reports, Crystal Palace are set to sack manager Frank de Boer, if the team lose to Burnley on Sunday. The manager’s life in the English top-flight has been rocky as the Eagles have lost all three fixtures under his leadership so far. The team have also given up six goals while scoring zero. 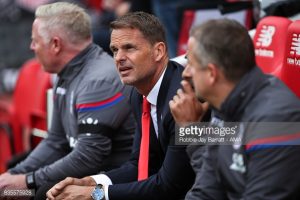 According to the Telegraph, Palace chairman Steve Parish has held talks with De Boer over his position. The newspaper also indicates the club considered sacking the Dutchman after the team’s week 3 loss to Swansea, which would have given a new man time to settle at the club during the international break.

Thus far, the Ajax-inspired revolution that De Boer has attempted to implement hasn’t worked. It is believed he will change his team’s formation to a 4-3-3 on Sunday rather than using the three man back line the Eagles have been playing to this point.

It shouldn’t come as any surprise that De Boer has struggled. The manager was sacked after just 85 days with Inter Milan last season, and his attempts to change a settled Crystal Palace team hasn’t gone down well with players.

Fantasysports.co.uk reported on Palace considering De Boer’s sacking after their week 2 loss to Liverpool. It looks likely that his days could be number as the man in charge of Crystal Palace.