According to the Telegraph, Manchester City will sell Raheem Sterling to a Premier League rival in one of the next two transfer windows. The newspaper’s sources indicate that Pep Guardiola has no plans of keeping the England international in his team once all of the players he wants are at the club. 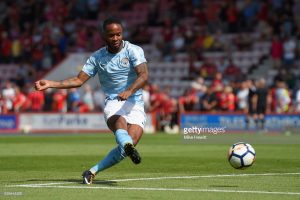 During the last week of the transfer window, it was reported that Manchester City had offered Sterling to Arsenal in exchange for Alexis Sanchez. Although these reports were not confirmed, it was believed Guardiola was ready to sacrifice the winger for Sanchez to join the team.

Several Premier League club officials have made it known that the Manchester City star will be available for transfer soon, as Guardiola has given up on Sterling already. The attacking player arrived from Liverpool in July 2014 for £56 million, and in 97 matches with the club, he has tallied 23 goals and 31 assists.

Sterling was voted the Premier League Player of the Month for August thanks to his solid performances for Manchester City. However, Guardiola still wants to bring Sanchez to the club, which would force him to sell the former Liverpool man or another player.

It is thought that Arsenal or Chelsea will be the team to sign Sterling, if he is put up for sale by Manchester City. Both teams could use his pace on the wing, but Arsenal may be put off by his transfer price and wage demands. Chelsea will have Eden Hazard back soon, but if he or Willian leave, Sterling could be bought as a replacement.