Under fire Arsenal manager Arsene Wenger will take his side up against a winless Bournemouth team today. A win could give Wenger a little breathing room after back-to-back defeats. Wenger’s position as Gunners boss doesn’t look secure, and BetVictor.com has placed former Borussia Dortmund coach Thomas Tuchel as the favourite to take over at the Emirates. 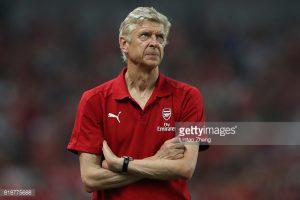 Tuchel, who left Dortmund following the team’s German Cup win in 2017, has been installed at 4/1 odds to takeover the Gunners. Tuchel took over for Jurgen Klopp at Dortmund in 2015, and spent just two seasons in charge of the yellow and black. In his time, Tuchel won 62% of his games in charge.

The former Dortmund coach isn’t the only possible replacement set at 4/1 odds. Current Atletico Madrid coach Diego Simeone is also 4/1 despite extending his contract with the club until 2020. ESPN Spanish football expert Sid Lowe believes there are clauses in Simeone’s deal that could allow him to leave. However, the club are opening a new 68,000-seat stadium on September 16th, and the club wanted to keep the manager and his key players for its unveiling.

Former Arsenal midfielder Patrick Vieira is 6/1 to become Wenger’s successor. The former French international is currently coaching Major League Soccer’s New York City FC, after being installed as their manager in January 2016. It is his first managerial job in the professional ranks after being a coach in Manchester City’s Elite Development Squad.

Although it is believed Wenger could leave Arsenal soon, he doesn’t currently lead the Premier League manager sack race.

BetVictor.com odds for next Arsenal manager: