Manchester City are already putting the wheels in motion for the January transfer window. The club have set their sights on Bayern Munich’s Robert Lewandowski as their main January transfer target as a rift has opened between the player and the German club. 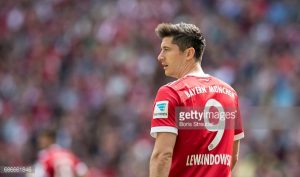 Lewandowski has not seen eye-to-eye with manager Carlo Ancelotti. The Bayern manager has seen several players become discipline problems, including Lewandowski and Franck Ribery. The latter acted angrily to being subbed in the Champions League in midweek and threw his shirt at the bench when taken off the pitch.

During the summer transfer window, Lewandowski was publicly critical over Bayern’s transfer policy. He was also critical of manager Ancelotti after finishing second to Pierre-Emerick Aubameyang in the Bundesliga golden boot race last term.

The striker is believed to be extremely unsettled, and wants to join a club with ambitions as high as Manchester City. The Polish hitman initially wanted to join Real Madrid, but the Spanish side have made it known they are not interested in adding Lewandowski to the team. Pep Guardiola is on high alert and wants to bring the Bayern striker to the side, despite the form of Sergio Aguero.

So far this season, Lewandowski has tallied five goals in four games. Manchester City have already agreed a deal for American defender Erik Palmer-Brown, and the current Sporting KC player will join the side in January after the Major League Soccer season concludes.