Manchester United are set to offer goalkeeper David De Gea to a new contract that will keep him at Old Trafford well past 2019. 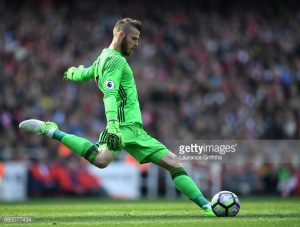 The Spanish goalkeeper has been on the radar of Real Madrid for some time, and it is believed Los Blancos are keen on adding De Gea to the side. However, Manchester United want to extend his contract to ward off Real Madrid’s approaches in the summer of 2018.

Real Madrid have been desperate to bring the Manchester United No. 1 to the capital to takeover for Keylor Navas, and a new contract at Old Trafford would – it is believed – finally keep Real Madrid away from the goalkeeper.

De Gea joined Manchester United in July 2011 for £22.5 million from Atletico Madrid. During his first season, pundits were very critical of De Gea’s performances. However, the Spanish shot stopper has proven to be one of the best in the world despite the early criticism. De Gea recently kept his 100th clean sheet since joining the Red Devils.

Although Real Madrid’s Navas has been criticised for his play in Real Madrid’s goal, several players have given their backing to Navas. Even Italian great Gianluigi Buffon has given Navas his backing as a ‘great’ keeper.

While the Red Devils are set to offer De Gea a new deal, the club are being linked with outfield players such as Edinson Cavani ahead of the next transfer window.