Manchester City’s Kevin De Bruyne is being tipped as the next major transfer target for Barcelona. The Belgian has been in sterling form for Manchester City this term, scoring two goals and adding three assists in all competitions. 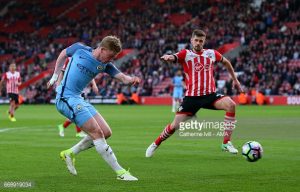 De Bruyne joined Manchester City in August 2015 for £66.6 million from Wolfsburg. The attacking midfielder has tallied 41 assists in 99 matches. De Bruyne has also tallied 25 goals to go along with his assists.

De Bruyne is believed to now be on Barcelona’s radar since the Spanish giants were unable to sign Liverpool’s Philippe Coutinho. Some are speculating the Belgian could fetch a similar fee to the one Neymar was sold for in July; if Manchester City were to sell the player that is. De Bruyne’s contract won’t expire until 2021, and with him being a major part of the team’s attack, it would seem the club would be interested in keeping him in at all costs.

Following Chelsea’s loss to Manchester City over the weekend, manager Antonio Conte said De Bruyne was a “complete player”. Former Chelsea manager Jose Mourinho sold De Bruyne during his time in charge of the club. After leaving Chelsea, the midfielder established himself as one of the best in Europe while playing in Germany.

Is Kevin De Bruyne the best midfielder in the Premier League?