According to reports, Liverpool’s Philippe Coutinho is devastated over his failed move from Liverpool to Barcelona. It was reported that Coutinho was in tears in front of his Brazil national teammates ahead of their recent World Cup qualifiers due to the move never materialising. 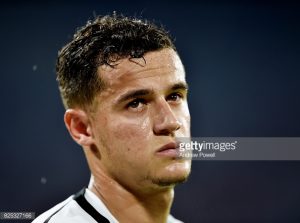 Since the failed purchase of Coutinho by Barcelona, the Catalan side have claimed Liverpool demanded £183 million for the player. Liverpool have denied Barcelona’s claims and have declared the reason Coutinho wasn’t sold had nothing to do with price; rather, it was due to Liverpool not wanting to sell the player.

Despite Liverpool’s denial of the price tag put on Coutinho’s head, Barcelona director Alberto Soler spoke about Liverpool’s desire for a high transfer fee putting off the deal.

“Liverpool were asking for 200m and logically we didn’t accept that,” Soler said at a news conference on Saturday.

“We thank the player for the efforts he made, because he did make a big effort and showed he wanted to play for us.

“The situation ended as it ended and there is nothing else we can do.”

Despite missing the Reds first five matches this term, three in the Premier League and two in the Champions League, Coutinho played in Brazil’s recent World Cup qualifier against Ecuador.

“PSG came to us with €222m [for Neymar] and that meant everyone knew we had money,” Soler said.

“When you go to the market and you have a lot of money, the demands made of you are extortionate.

“We found ourselves in unbelievable situations.”

Although Soler spoke about the inflated prices of the transfer market when referring to Coutinho, his club did make out well selling Neymar for the highest fee of all-time.

“What has happened in the market this year takes us to a model of football different to the one we are used to.

“We used to be the ones that led the market and now countries and investment funds are leading it. Countries have become the main agents in the football world.”

Liverpool were able to make several key signings while keeping Coutinho in the fold.