Liverpool’s Emre Can is in the final year of his current contract. According to sources, the German international has dragged his feet on signing a new deal and it looks increasingly likely he will leave the club for free. 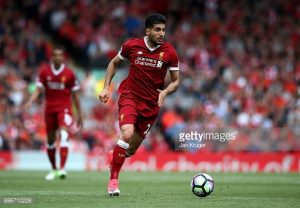 Can arrived at Liverpool in the summer of 2014 from Bayer Leverkusen. The Reds paid £10 million for the central midfielder. Since arriving on Merseyside, Can has played 138 times, scoring 10 goals.

Emre Can: Free agent to be

Can’s Liverpool contract expires in July 2018, and clubs around Europe are already lining up to sign the German international. Italy’s Juventus have made their interest known. However, it is believed Jose Mourinho and Manchester United have now become the top choice of Can.

Could Liverpool sell Emre Can?

Liverpool are in a difficult situation. If the club do not agree a new contract with Can, he is free to negotiate a pre-contract with a club outside of England. Liverpool could sell him in January, but the club would not sell him to rivals Manchester United.

Teams outside of England, such as Juventus, would be happy to wait until the end of Can’s contract to get him for free; rather than paying a transfer fee. Can is currently valued at around £14 million.

Liverpool have already agreed a deal to sign RB Leipzig’s Naby Keita next summer. Liverpool could be willing to let Can leave. However, losing him for free or selling him to a direct rival will be something Liverpool will try to prevent.