Antonio Conte is preparing his Chelsea squad for their trip to Crystal Palace this weekend. The Blues sit in fourth place, six points behind league leaders Manchester City. Chelsea are coming off a 1-0 loss to Manchester City before the international break, and speculation has recently grown that Conte could leave the club. 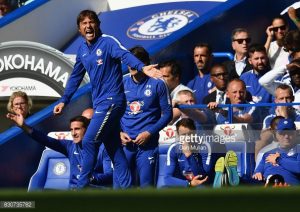 Much of the speculation surrounding Conte has been a rumoured move to AC Milan. The Italian giants spent large sums during the offseason, but have not played as well as expected. The team’s play has underachieved under coach Vincenzo Montella, and it is believed Conte is Milan’s choice to takeover the side.

Despite the rumours of Conte joining the San Siro club, Milan’s director of football, Massimiliano Mirabelli, has thrown cold water on the speculation.

“We already have a manager and we are not thinking of Conte nor about other managers,” Mirabelli told Radio Rossonera.

While Milan may not be looking at Conte as their next manager, the team are hoping to sign Chelsea transfer target Andrea Belotti. The Italian striker was linked to Manchester United and Chelsea over the summer, but the asking price for the No. 9 was too high. The 23-year-old Belotti has scored three goals in seven matches for Torino thus far. Milan hope to disrupt Chelsea’s transfer attempt in January, and land the Italian.

“Belotti? Everyone knows we wanted to sign him. He is a strong player and an AC Milan fan. Maybe he will join one day,” Mirabelli stated.