Arsenal striker Olivier Giroud has been ruled out injured until February. Giroud suffered a hamstring injury recently against West Ham and reports indicate it will prevent him from leaving the club in January. 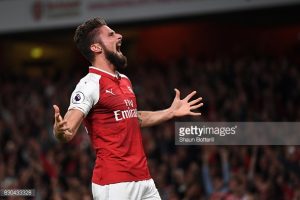 Everton and West Ham were in the running to sign Giroud. However, the Arsenal striker has suffered a muscle tear that will most likely keep him at the Emirates. The Frenchman has started just one game this Premier League season, but he has scored four goals for the Gunners.

Despite the injury, it has been reported by English media that Arsenal doesn’t want to sell the forward. Giroud was injured in the Gunners’ Carabao Cup game against West Ham, and was replaced in the 78th minute.

According to French newspaper L’Equipe, Giroud’s muscle injury will keep him out for six weeks. In addition, the Arsenal striker’s injury could keep him from being selected for France’s World Cup squad.

Giroud is averaging a mere 24 minutes per appearance with Arsenal in the Premier League this term. The addition of Alexandre Lacazette has seen Giroud’s time on the pitch diminish greatly this term. The lack of game time has caused Giroud to see a move elsewhere. During the offseason transfer window, Giroud had been linked with a move to Everton.

While Giroud will sit out injured over the next six weeks, it was announced his agent will arrive in London during the week to speak with Arsenal executives.

“It can make things complicated, but a clash, that kind of thing is not in Olivier’s nature, nor in mine,” Michael Manuello, Giroud’s agent, said.

“Now, depending on the offers, we will sit around a table and talk.

“The most important thing is to know what will be offered or not this winter, to find a better project.”