After being told he wasn’t needed at Stamford Bridge by manager Antoine Conte, Chelsea’s Diego Costa could be on his way to Everton. The Telegraph is reporting the Toffees may seek to sign Costa on a short-term loan deal before he returns to Atletico Madrid in January. 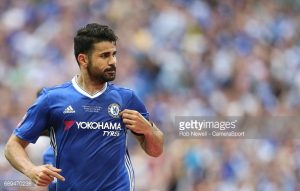 Costa has made no secret of his desire to leave Chelsea after clashing with Conte, and he doesn’t want to return to the club this season. Everton manager Ronald Koeman wants to strength is newly assembled side further, and a short-term loan for an in-form Costa could help propel Everton into the top five early in the season. Costa is expected to join Atletico in January once the team’s transfer ban is lifted.

Speaking in a press conference, Koeman addressed a question in regards to Costa’s possible arrival.

“Of course you like to sign players for the future,” Koeman stated. “But if you can get the best one that way, then why not?

“It’s difficult ­because it needs to be a quality player, or a young player who can develop or improve.

“We have the possibility maybe to sign good players, but we don’t play in the Champions League – and that sometimes makes things very difficult.”

Costa was key in Chelsea run to the Premier League title last season, but his omission from Conte’s plans at Stamford Bridge have left many questioning whether Chelsea can challenge for a trophy this season. Although he is Chelsea’s Diego Costa currently, it doesn’t look like the Spaniard’s time at Stamford Bridge will last much longer.