According to reports from the Mirror, Arsenal are preparing themselves for a swap deal-plus cash with FC Barcelona. The Gunners will send playmaker Mesut Ozil to the Spanish side for winger Arda Turan along with a considerable amount of money before Thursday’s transfer window closure. 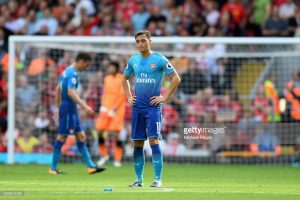 Ozil has one year left on his current Arsenal contract and the two sides have failed to come to terms on a new deal. Turan has had a disappointing spell at Barcelona since arriving from Atletico Madrid in July 2015 for £31 million. Barcelona is ready to send the Turkish flop to the Emirates along with cash for Ozil as the team look to overhaul their ageing side.

Arsenal are in the midst of  losing both Ozil and Alexis Sanchez for free next season, and the lose of both without compensation could be incredibly damaging to the club.

On Tuesday, Manchester City proposed a swap deal with the Gunners for Sanchez in exchange for Raheem Sterling and cash. There has been no word on whether Arsenal will agree the deal or not.

Ozil previously played for Barcelona’s archrivals Real Madrid for three seasons. The German arrived at Madrid from Werder Bremen for a mere £16m following the 2010 World Cup. In 2013, Arsenal paid Madrid over £42m for the German’s services, and the playmaker has helped the club win three FA Cups during his time in North London.

Turan is also on the radar of French champions Monaco, who will use money earned from the sale of Kylian Mbappe to sign Turkish international if his move to Arsenal does not come off.