According to the BBC, Riyad Mahrez has been allowed to leave the Algerian national team to complete a pending transfer deal. Reports from the Daily Express indicate Manchester United will be his destination although several teams have lined up to sign the attacking midfielder. 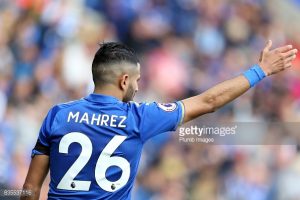 Roma were originally thought to be Mahrez’s destination, however, Leicester have turned away three transfer bids for the player. The Serie A team’s last bid was in the region of £32 million. Leicester have valued Mahrez at £50m this summer.

Although Manchester United seem to have a number of attacking midfielders and wide players already in their ranks, manager Jose Mourinho has continued to look for new players at these positions. Despite the good form of both Anthony Martial and Marcus Rashford this early season, Mourinho has stated he wants another left sided attacker.

Mahrez had been linked to Arsenal, but it looks as though Arsene Wenger has turned his attention to other players. The Algerian could end up at Liverpool, however, the Reds signed Alex Oxlade-Chamberlain on Wednesday.

Tottenham are the only other real option in the Premier League that Mahrez has been linked with. Spurs have failed to make any attacking signings this summer. The addition of the Leicester man would be a big boast for Tottenham supporters who feel the club have taken a major step backwards this transfer window.