Arsenal and Chelsea are battling for the signature of Osasuna central defender Iker San Vicente. Just 16, the defender is available in January on a free transfer as his contract with the Spanish side will expire. 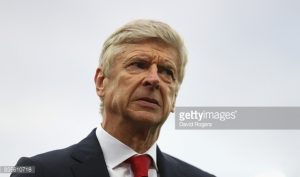 San Vicente has not made the breakthrough with the to Osasuna first team. However, he has come through the club’s ranks and is currently playing in their youth team. Osasuna were relegated from La Liga at the end of last term, which  helped San Vicente decide to reject the latest long-term contract offer from the club.

San Vicente is already being compared to Barcelona and Spain defender Gerard Pique. San Vincete’s physical play and ball skill has reminded many of Pique. It is expected San Vicente will go on to be a star with whichever club lands his signature.

Arsenal and Chelsea are not the only teams interested in signing San Vicente on a free transfer in January. Real Madrid and Barcelona are also linked to the centre-back. A move to one of Spain’s big clubs could scupper any hope of the English duo signing San Vincente.

Juventus is also reportedly interested in landing the central defender.

Due Arsenal or Chelsea have a chance of signing Iker San Vicente on a free transfer? Get into the discussion with www.Fantasysports.co.uk.