Liverpool coach Pep Lijnders will leave Anfield in January, according to the club. The coach is set to take a management position in the Netherlands as he closes out his time with Liverpool. 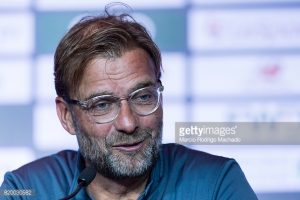 Lijnders has been Liverpool’s first-team development coach and a member of manager Jurgen Klopp’s backroom staff since 2015. Prior to Klopp’s arrival, the Dutchman served under Brendan Rodgers. Lijnders is regarded highly by Liverpool’s coaches and players, and his departure is a blow for the team going forward.

Lijnders has been credited with helping youth players at the club establish themselves with Liverpool’s first team. One such player that Lijnders helped greatly is Trent Alexander-Arnold. Lijnders coached the young full-back at the under-16 and under-18 levels before he made his first team breakthrough this term.

Lijnders will join Dutch second division side NEC Nijmegen. The club are second in the table in the Netherlands and could return to the top-flight after being relegated last season.

“Firstly, I am gutted to be losing such a valuable member of our coaching team and such a brilliant person from our group,” Klopp stated.

“But that is tempered by the fact I am very excited for him to have this opportunity and as much as we would have loved for him to remain with us, we cannot stand in his way for what is a fantastic opportunity.”

Liverpool have had a number of youth team players that Lijnders helped develop. It was expected many of them would break into the Liverpool side in 2016-17 or 2017-18. However, Alexander-Arnold is thus far the only one of the group to thrive in the senior team.

Liverpool are back in action against Everton in the FA Cup on Friday. The match could see new signing Virgil van Dijk make his Anfield debut. Meanwhile, speculation still surrounds the possible departure of Philippe Coutinho.