Liverpool attempted to improve their defence in the offseason transfer market by signing Southampton’s Virgil van Dijk. However, the Reds were unable to land the centre-back and were reported to the Premier League over their tactics to sign him. Despite the setbacks, it looks likely that Liverpool will re-ignite their interest in the player come January. 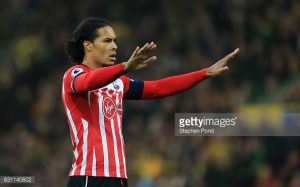 In an interview with Redmen TV, Liverpool ECHO Football Editor Andy Kelly, claimed Liverpool will make a bid to sign the defender in the January transfer window. The writer stated that Liverpool’s reluctance to sign an “alternative” centre-back shows the Reds will go after Van Dijk in once the market opens after the New Year.

Kelly pointed to the Liverpool board’s backing of manager Jurgen Klopp as one of the key reasons the team will continue to pursue the Southampton player. The board not only signed Klopp targets this past offseason, but the club retained Philippe Coutinho; and the Brazilian may feature in Saturday’s match against Manchester City.

Liverpool blog, Empire of the Kop, posted an excerpt from Kelly’s interview on Redmen TV. In it, Kelly detailed a meeting he had with Liverpool sporting director Michael Edwards.

“I went up to Melwood, just as the window was starting and the vibe from the club was always, and this was the message really that they wanted to seen to be coming from Michael Edwards as well, was that they weren’t going to accept second best, that Michael Edwards wanted to deliver Jurgen Klopp’s No.1 choices.

“That’s not giving away any secrets to anyone because everyone will have seen by the way Liverpool acted all window that they wanted No.1 choices.”

Liverpool have started the Premier League season well, and are currently undefeated. If the Reds can continue their play and qualify for the knockout stages of the Champions League, the club’s board will most likely attempt sign one or two key players come January. Van Dijk will most likely be one of them.