Despite the fallout over Philippe Coutinho’s failed transfer to Barcelona at the end of the summer window, Liverpool look set to feature the Brazilian in Saturday’s massive Premier League fixture against Manchester City. 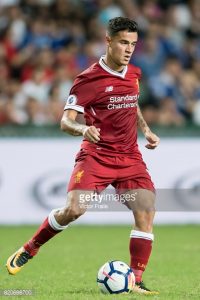 Coutinho was said to have been in tears over his failed move to Camp Nou, despite Liverpool consistently stating the player was not for sale during the market window. The playmaker only featured as a substitute in Brazil’s win last Thursday over Ecuador, but team manager Tite has stated Coutinho is fit and ready to play a full game against Colombia on Tuesday night.

According to the Mirror, Jurgen Klopp is ready to welcome Coutinho “straight back into the squad”, which means he could feature in Saturday’s clash at the Etihad.

Both Manchester City and Liverpool have worked together to book a private jet for their South American football stars playing on Tuesday night. The Lunchtime kickoff’s start would make it difficult for players flying back on commercial flights to be on time for. However, the two clubs have organised a jet to transport the players back well ahead of Saturday’s top of the league match.

Chelsea have also helped to fund the private jet that will fly Gabriel Jesus, Ederson, Fernandinho, Coutinho, Roberto Firmino and Chelsea’s Willian back to England. The players should arrive in England on Wednesday morning.

With time left to train ahead of the fixture, Coutinho could feature for the Reds for the first time this term.