Arsenal have stepped up their pursuit of Paris Saint-Germain forward Julian Draxler as Alexis Sanchez’s move to Manchester City looks more likely on the final day of the transfer window. 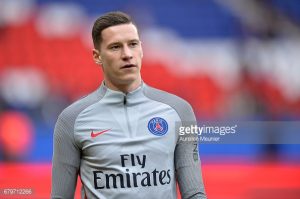 Draxler, who was signed in January from Wolfsburg, is on the fringes of the PSG team now that Neymar has arrived from Barcelona. The Parisian club need to get in line with Financial Fair Play, and selling or loaning players out this season is a must before the window closes tonight.

Jese and Grzegorz Krychowiak have already been sent out on loan to Stoke City and West Brom, respectively; and it looks possible that Draxler will be sold to recoup some of the money the team have spent on players in the last few years.

Arsenal could lose two to three players today as Sanchez and Mesut Ozil have been linked with moves away from the club. In the last few days alone, both players have been the subjects of swap-deals with Manchester City and Barcelona, respectively. There is also the chance that Olivier Giroud could be sold as he has attracted interest from Marseille and Lyon this summer.

The Gunners sold winger Alex Oxlade-Chamberlain on Wednesday to Liverpool for £35m, as the player’s contract had less than 12 months left on it. Sanchez and Ozil can leave for free next summer, and it is believed Arsene Wenger may be forced to sell them today by the Arsenal board.

Arsenal have been linked with a variety of players this summer including Monaco’s Thomas Lemar. The Frenchman doesn’t appear to be heading to the Emirates as Monaco have stated they intend to keep him this term.

Draxler has been a player Wenger has admired for some time. The German was in excellent form last term for PSG, but is now on the outs thanks to Neymar’s mega transfer in July. If PSG continue their current motive of loaning out players, Draxler could end up at Arsenal as the Parisian club have done everything to avoid sending players to Champions League rivals.